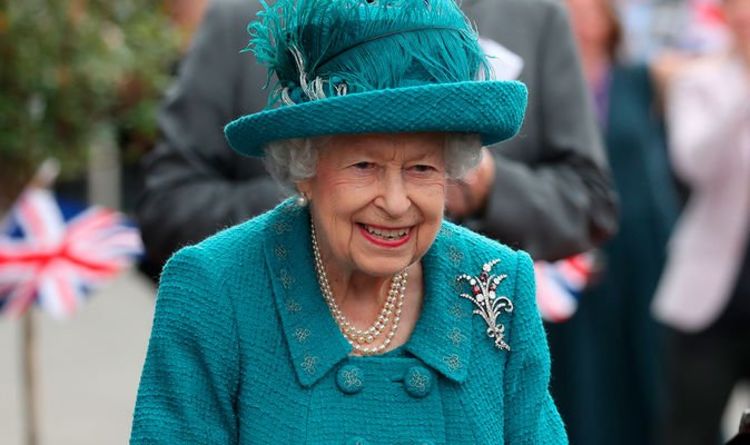 Queen Elizabeth II, 95, was in Manchester on Thursday where she visited the set of Coronation Street and met some of the soap’s longest-serving actors. Footage from the encounter showed the Queen to be “happy” and “re-energised” despite having had a difficult start to the year with the death of her beloved husband Prince Philip, a body language expert has claimed.

The Royal Family shared footage from the Queen’s visit to the Coronation Street set on Twitter.

The tweet accompanying the video clip read: “Today The Queen is visiting the set of the world’s longest-running soap opera: Coronation Street.

During her tour, the Queen met four Coronation Street actors who between them have worked for more than 200 years on the show.

William “Bill” Roache, who plays Ken Barlow, Barbara Knox who is cast as Rita, Sue Nicholls, who plays Audrey and Helen Worth, who plays Gail, all greeted the Queen with bows and curtsies on set.

Mr Roache told the Queen he had first seen her when she visited Jamaica in 1963 when he was serving as an officer with the Royal Welsh Fusiliers.

He added: “Thank you so much for coming today.”

Ms Knox told the Queen when she first arrived: “Good morning, Your Majesty, you have brought the sunshine.”

To which Mr Roache joked: “Well, ma’am, you’re the one who has carried on.”

Body language expert and author Judi James analysed the clip of the Queen meeting some of Britain’s best-loved soap stars and shared her insights.

The expert told Express.co.uk: “There are at least four iconic figures in this footage but only one who plays herself for a living.

“Ken, Rita and Audrey line up outside the Rovers and it is so sweet to see Ken engaging HM in conversation while Rita beams and Audrey leans forward, wringing her hands in what looks like a gesture of anticipation tinged with anxiety.”

The Queen looked genuinely delighted to be there, Judi claimed.

She added: “The Queen looks so engaged here and genuinely impressed to be walking the path alongside the famous cobbles.

“All of the much-loved people in this footage have been entertaining and thrilling the country for decades and thankfully all four show no signs of easing off despite their impressive ages.”

Despite having lost her husband Prince Philip earlier this year, the Queen seems to be “re-energised” and “happy”, Judi claimed.

She added: “If anything the Queen has appeared re-energized and even happier recently, showing her fun side that we had always been told she possessed.

“Here she looks anything but frail and truly enthusiastic about meeting some of our TV favourites.”

Prince Charles net worth: Is Charles a billionaire? Staggering wealth of future King

Prince Charles net worth: Is Charles a billionaire? Staggering wealth of...

Prince Charles net worth: Is Charles a billionaire? Staggering wealth of...