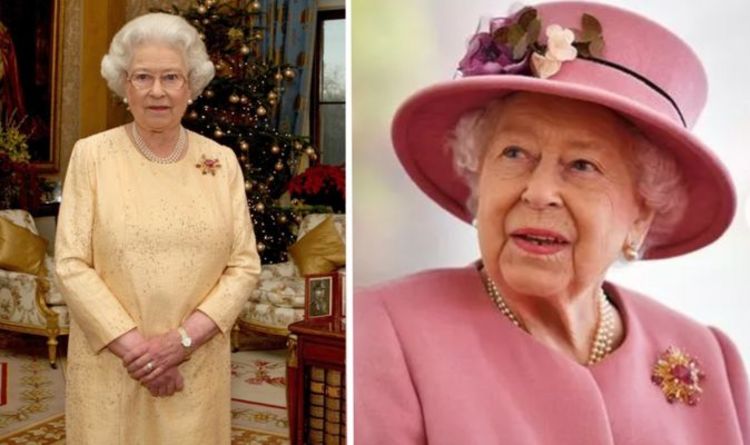 Her Majesty has one of the largest brooch collections in the world. However, although she has many to choose from, the Queen wears some brooches more regularly than others. One of these is her Scarab brooch.

The Scarab brooch holds sentimental value for the Queen, now more than ever before, because it was given to Her Majesty as a gift from her late husband, Prince Philip.

The Duke of Edinburgh died last month, on April 9.

The brooch has been a part of the Queen’s collection for more than five decades as she received it from Prince Philip in 1966.

Made by Anglo-Italian designer Andrew Grima, the brooch features a large ruby at its centre with smaller rubies surrounding it.

For her and Prince Philip’s official platinum anniversary portrait, which was taken in 2017, the Queen paired the brooch with a textured cream dress and black patent shoes.

As for other jewellery, Her Majesty wore her iconic pearl earrings and three strings of pearls around her neck, which she is rarely seen without.

Other occasions where Her Majesty decided to wear the Scarab brooch included an appearance at Bournemouth Hall in 1966, a Golden Jubilee tour in Falmouth in 2002, and a ceremony for the new National Armed Forces Memorial in Lichfield in 2007.

As usual, the Queen preferred to don the brooch with brightly coloured outfits.

In 1966, she wore a beautiful sky blue coat with a matching turban and white silk gloves, while for her Golden Jubilee tour she opted for a deep pink coat and a matching hat.

Her Majesty wore pink with the brooch for the ceremony in 2007 too, this time pairing her coat with a felt hat with a flower pinned to it.

In December 2007, the Queen wore a brooch for another special occasion – appearing on British TV screens for the 50th anniversary of her first televised Christmas message.

For this appearance, Her Majesty chose to wear a pale yellow dress, which matched the gold of her slim watch and the yellow gold of her brooch.

More recently, the Queen wore the brooch with a grey and white floral dress featuring a stylish scallop neckline for her annual Christmas speech in 2018.