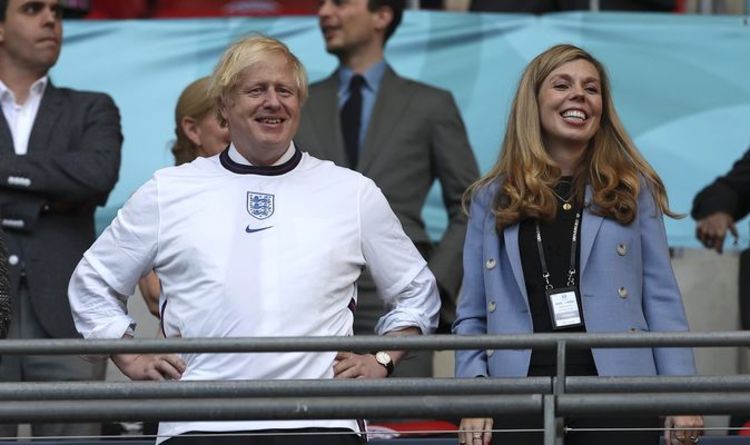 Yesterday, Gareth Southgate’s team made a historic victory after beating Denmark 2-1 in the semi-finals. Now England will face off against Italy in the finals at Wembley Stadium. An article on Gazzetta dello Sport – which has since been deleted – claimed the “generous penalty” awarded to England “confirms the suspicions of a return of favour” to Mr Johnson for stopping the European Super League.

However, many England fans have taken to Twitter to support their team claiming Italian are getting rattled.

One person commented: “No one does conspiracy theories like the Italians…best in the business, world-class.

“Just getting warmed up in case a big one goes against them on Sunday.

“It could be Korea 2002 all over again, when they accused the ref and Fifa of match-rigging.”

Another person added: “The Italians talking about diving?!

While someone else echoed: “Coming from a country that is known for match-fixing it makes it absolutely hilarious.”

A sixth person said Mr Johnson had nothing to do with stopping the Super League and accused him of jumping on the bandwagon.

They wrote: “Johnson did precisely nothing to stop the Super League.

“He just jumped on the bandwagon at the end after fans made it clear they were unhappy.”

Many have suggested this is a reference to the popular Three Lions song and claims Raheem Sterling did not deserve the penalty awarded to him.

Earlier this year, Mr Johnson said they should “drop a legislative bomb” to stop the European Super League and “we should do it now”.

He added: “What we want to do first of all is back the Football Association, back the Premier League, and hope that we can thwart this proposal before it goes very much further.”

This is the first time England have reached the final in a football tournament since winning the 1966 World Cup.

However, Italy has won the World Cup four times and the European Championships once, in 1968, and finished second in 2000 and 2012.