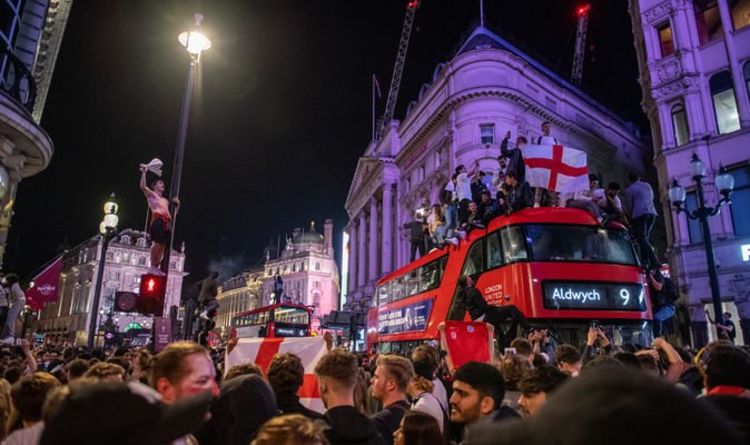 The Three Lions dispatched the Danes 2-1 in a tense game to secure their place in the final of Euro 2020. England’s heroes will now face Italy on Sunday at 8pm at Wembley in what will be their first appearance in the final of a major football tournament since the 1966 World Cup. After the game, thousands of fans spilled onto the streets of central London as they raucously and jubilantly celebrated the win.

One video posted to Twitter showed fans congregating in Piccadilly Circus, where they were met by a heavy police presence.

In another clip, a number of fans were filmed dancing on the top of a red double-decker bus in central London.

One person proceeded to surf off the bus, landing back on terra firms with a bit of a bump and to cheers from onlookers in the crowd.

The antics of fans provoked a mixed reaction on social media.

One user condemned the behaviour of the crowds, saying: “Absolute state of our fan base, why can’t our fans celebrate without being a joke of the footballing world.”

England’s victory on Wednesday night finally breaks a jinx which has persisted since the beginning of the nineties.

The national team had lost their last three semi-finals – at the Italia World Cup in 1990, at Euro 1996 in England and at the 2018 World Cup in Russia.