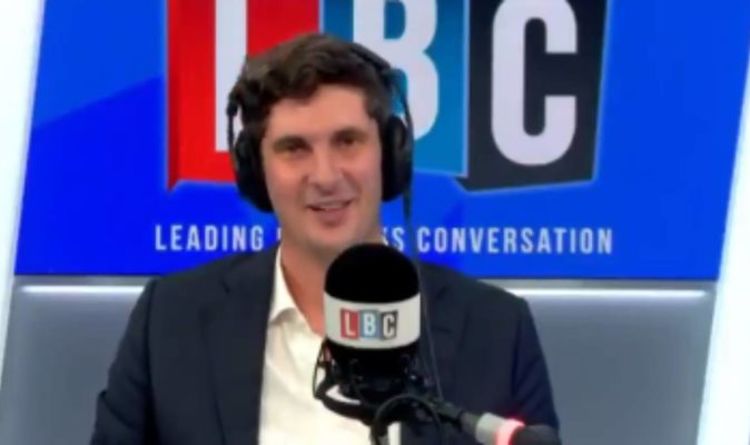 Chancellor Rishi Sunak faced light-hearted calls to introduce a bank holiday for Monday to allow England fans to celebrate properly. Appearing on LBC, Mr Sunak was directly asked to introduce the holiday to which Mr Sunak shared a laugh with presenter Tom Swarbrick. Pubs in the UK are set to have their licences extended by 45 minutes to allow fans to watch the final, even if it goes into extra time and penalties.

Appearing on LBC, Mr Sunak originally appeared to discuss Universal Credit and the phasing out of the £20 a week uplift.

Mr Swarbrick pleaded with the Chancellor to allow a Monday bank holiday.

He replied: “Well I think you and I may be the only people who are up at this point today!

“I hope everyone enjoys their extra 45 minutes in the pub on Sunday.”

Around 60,000 fans descended on Wembley to watch the game after being subject to negative testing and double vaccinations.

Prince William was seen supporting England at the stadium but was not joined by Kate Middleton or Prince George.

The Duchess of Cambridge is currently self-isolating following being in contact with someone with COVID-19.

The temporary measure has been encouraged by Sir Iain Duncan Smith and Labout MPs to make the uplift permanent to help the less well off in the country.

The Chancellor is struggling to plug the £6billion gap made by the uplift and so will phase out the uplift towards the end of September.

Despite criticisms for abandoning the UK’s poorest, Mr Sunak insists that the Government’s investment into apprenticeships, job training and the rise of the minimum wage was supporting people in “a different way”.

He stressed Government wanted to get people into work and into better types of work which would ultimately pay more.

High blood sugar: The sweet treat to have one hour after...

High blood sugar: The sweet treat to have one hour after...