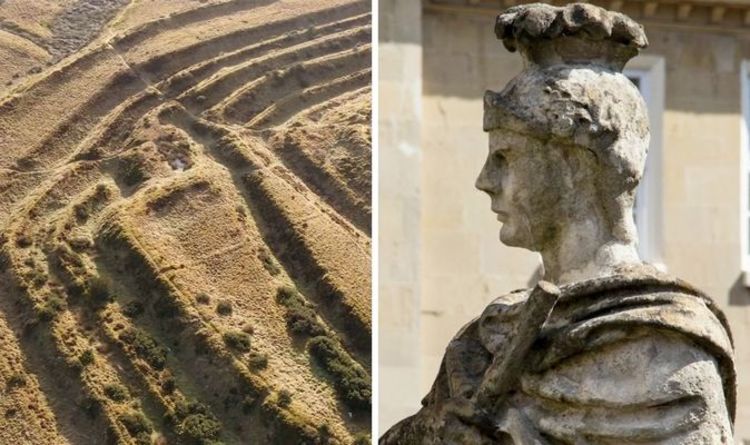 The Roman conquest of Britain began around 2,000 years ago. They would go on to occupy the island for 400 years. In this time, soldiers from across the Empire worked their way north.

At each place they erected stone and wooden forts, among other buildings, many of which last today.

Hadrian’s Wall is perhaps the most famous Roman structure in the UK, spanning 73 miles from the River Tyne near the North Sea and all the way to the Solway Firth near the Irish Sea.

The imperial power did not stop at England, which was inhabited by the Celts.

Here the Romans built one of the Empire’s largest and most intricate forts, Ardoch Fort.

First built in the first century AD, it came during a time when the Roman armies were intent on conquering the whole of Scotland.

Dr Tibbs said: “The area around Ardoch Fort is a key area in the Roman period, throughout the Roman invasions, and we have three of those in Scotland.

JUST IN: Labour has ‘no way back’ as Brexit ‘exposes party’s contempt of voters

Yet, she added: “Whether it was him that actually founded it we don’t have an exact foundation date.

“Some forts you’re lucky enough to find something that actually give you a date like a coin hoard that has the latest date which at least helps you.

“We don’t have that evidence for Ardoch but we do have plenty of evidence showing that it was occupied in the Eighties AD.”

This is very much contemporary with Agricola’s campaigns and would have been occupied when the general was operating in Scotland.

Researchers have unearthed not only one Roman fort but two: a first century Flavian fort on top of a second century fort which reused the original framework and changed the perimeters.

The show’s presenter and researcher Tristan Hughes took viewers on a tour of the recycled ditches which measure six feet in depth.

He said: “It’s astonishing, difficult to come up the sides even today, over there near to the fort itself, you can see some of the best preserved earthworks from Roman Britain – surviving to this day, it’s absolutely astonishing.”

Excavations which took place in the late 19th century, while primitive, have helped today’s researchers in matching the two sets of ditches to their respective Roman periods.

Each outpost in the country left at different times.

The soldiers left for Rome which was at the time under attack.

Britain soon fell into chaos as native tribes and foreign invaders battled it out for power.

There was a subsequent spread of Anglos, Saxons and Franks across the island.

The prettiest spots for picnics in and around Bristol

‘Approach carefully’ How to get neighbours to turn the music down

The prettiest spots for picnics in and around Bristol

‘Approach carefully’ How to get neighbours to turn the music down