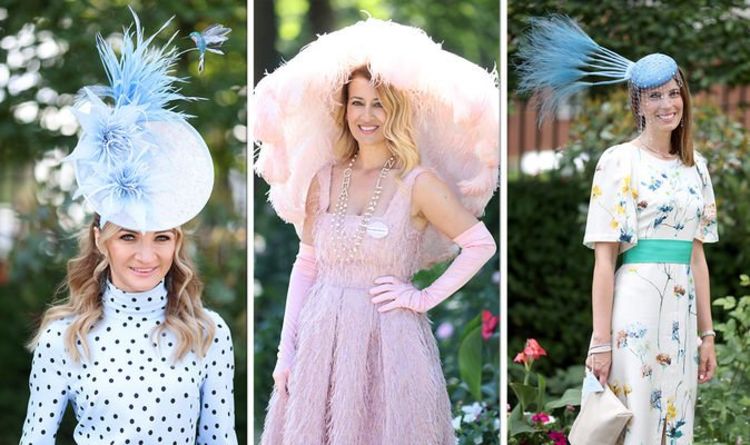 The Royal Ascot is an annual horse racing event that takes place in Ascot, Berkshire. It’s an occasion for many to don their best outfits, complete with their favourite hats. British celebrities are among the crowds every year, including members of the Royal Family.

The second day of this year’s Royal Ascot has kicked off in a similar style to yesterday: female guests have started to arrive wearing colourful dresses, high heels, and huge hats.

A Royal Ascot outfit would not be complete without a unique, stand-out hat.

Wearing a headpiece is even stated in the dress code.

READ MORE: 6 foolproof tricks to get rid of slugs in your garden organically

Another racegoer to don a feathered beret opted for a pink hat with pink, yellow, orange, and blue feathers pinned to its right side.

This hat was very small compared to another woman’s huge umbrella-like headpiece.

The hat was covered in huge white feathers tinged with pink, making the accessory look very similar to a flamingo’s outstretched wings.

The racegoer paired the hat with a matching pale pink dress and a chunky diamanté necklace with the letters ‘Chanel’ hanging from it.

Many women used white feathers to make a statement at today’s Royal Ascot, with another racegoer choosing to wear a small white headpiece featuring huge feathers that curved out to the sides.

Even a member of the Royal Family opted for a feather hat today.

Sophie, Countess of Wessex, wore a wide-brimmed pale pink hat on the side of her head covered with pink and purple flowers.

The hat’s colours complemented the rest of the royal’s outfits, which included a pleated skirt with large purple and pink flowers printed on it.

Florals were a common print at today’s second day of the Royal Ascot.

One racegoer arrived wearing a pale blue hat with four light and royal blue flowers attached to its side.

Interestingly, sticking out from the flowers in all directions were multiple blue and purple sticks, resembling metal straws.

Pink and blue were extremely popular colours this afternoon, and two other attendees arrived wearing similar floral hats, one in pale blue and the other in baby pink.

The blue hat even featured a hovering blue kingfisher.