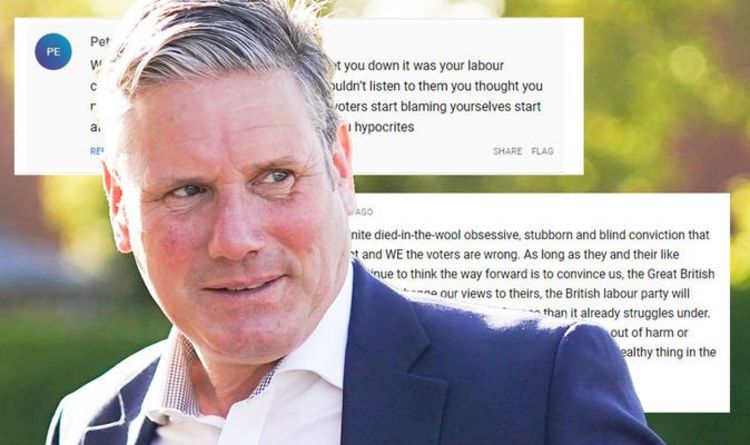 Chris Emmas-Williams sparked outrage when he claimed voters had “let us down” after he lost his seat as leader of Amber Valley Borough Council to the Tories. He told Derby Live: “The voters have let us down. I hope they don’t live to regret it.”

His comments were instantly condemned by Britons who pointed out it was their choice who they voted for.

One wrote: “Labour is beyond saving. Any real Labour politicians, if there are any, should resign and form a new party.

“Everyone is realising the so-called Labour party of today should actually be called the globalist party.

“Do stop blaming voters, start blaming yourselves and start at the top with Sir kneeling and the rest of you hypocrites.”

A third raged: “Typical Corbinite died-in-the-wool obsessive, stubborn and blind conviction that THEY are right and WE the voters are wrong.

“As long as they and their like obstinately continue to think the way forward is to convince us, the Great British Public, that we should change our views to theirs, the British labour party will continue to shrink to even greater insignificance than it already struggles under.

“At least things are currently constraining the lefty-extremists out of harm or mischief’s way but a weak or non-existent opposition is not a healthy thing in the long run.”

The Derbyshire borough council was one of many that Labour lost on a terrible night.

The Tories, who have been in power for 11 years, meanwhile gained control of councils for Harlow, Northumberland, Pendle, Nottinghamshire, Nuneaton, Dudley, Cornwall, Basildon and Maidstone.

Several of these were former Labour heartlands in the Midlands and north of England.

They also lost Hartlepool, formerly a safe Labour seat, with the Conservative candidate getting over 50 percent of the vote.

One view that Mr Emmas-Williams did share with most of the country was that the results had been terrible news for his party.

He said: “It’s been a disastrous day for us.

“I don’t think I’ve ever been in an election with so acrimony and so many lies in campaign literature.”

Skin cancer symptoms: What does skin cancer look like? 10 signs...