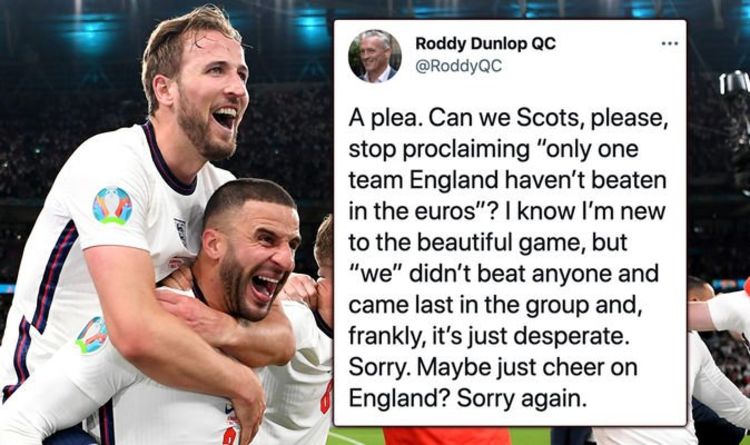 During a nerve-wracking Euro 2020 semi-final match at Wembley Stadium in front of 60,000 fans on Wednesday night, Gareth Southgate’s team beat Denmark 2-1 after extra time to spark glorious scenes throughout the country.

Gordon Smart, former journalist and editor of The Scottish Sun, was one of the many Scots who have hit out at England’s success.

He also took aim at the notion of Scotland being part of the Three Lions’ success, adding that Scotland is part of the United Kingdom and not England.

However, Scotland’s attempts to dishearten football fans has been attacked by a Scottish lawyer who called their attempts “desperate”.

Roddy Dunlop QC tweeted: “A plea. Can we Scots, please, stop proclaiming ‘only one team England haven’t beaten in the euros’?

“I know I’m new to the beautiful game, but ‘we’ didn’t beat anyone and came last in the group and, frankly, it’s just desperate.

England’s winning goal came in the 104th minute, after Harry Kane fired in the rebound when his penalty was saved by Denmark goalkeeper Kasper Schmeichel.

He added: “It is difficult to understand unless you support Scotland, Wales or Northern Ireland.

“You tune into the commentary and every three seconds you are reminded about 1966.

“Richard Madeley did it the other day when he said ‘you lot’ and he talks about ‘us’ as part of England.

“We are not a part of England, it is the United Kingdom.”

He said: “I’m so proud of the players. It’s an incredible occasion to be a part of.

“We knew it wouldn’t be straightforward.

“When you’ve waited as long as we have to get through a semi-final, the players – considering the limited international experience some of them have – have done an incredible job.”

Southgate added: “The most pleasing thing is we’ve given the fans and nation a fantastic night and the journey carries on for another four days,”

“We’ve got to enjoy the fact we’re in the final but there’s one more massive hurdle to conquer.”

England will play Italy in the finals of Euro 2020 this Sunday at Wembley Stadium.