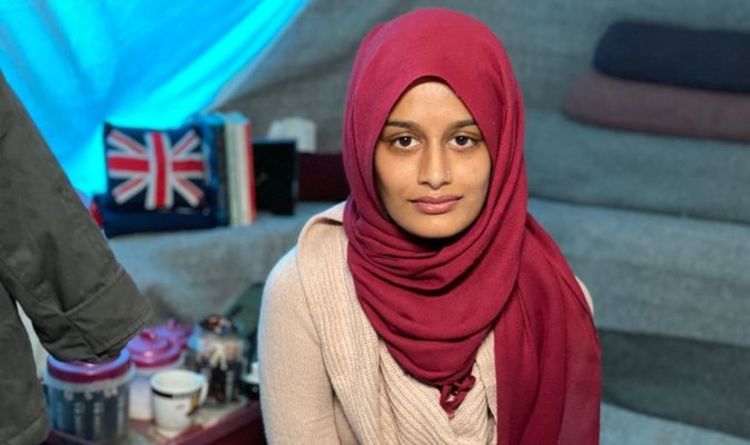 In her latest interview, the 21-year-old said she doesn’t think she was a terrorist and insists she doesn’t need to be rehabilitated. In fact, the former East London schoolgirl said she would “love” to help rehabilitate others. Ms Begum, who was stripped of her UK citizenship in February 2019, donned a completely different look in the interview, wearing jeans, a T-shirt and other western fashion accessories.

Ms Begum, who left Britain to join the Islamic State in 2015, was interviewed at the al-Roj prison camp in Syria by journalist Andrew Drury.

Her long dark hair was worn down and her fingernails were painted a bright red.

The style is in stark contrast to her previous image as a jihadi bride in a hijab and headscarf.

She also insisted that she was ready to return to the UK and did not require rehabilitation.

She said: “I don’t think I was a terrorist. I think I was just a dumb kid who made one mistake.

But social media users are not convinced by Ms Begum’s change of heart and want the Government to ensure she is not allowed to return to the UK.

Another person said: “Never! She chose her path.”

While one person fumed: “Omg if I’m not sick of the pleading. You are f***ing staying there.

“You are a risk you turned on this country now you want to come back.”

But other social media users were more sympathetic and noted Ms Begum was just 15 when she decided to join Islamic State.

They wrote: “So 15 years olds can’t vote, can’t have children… it’s almost as if there’s a legal understanding that they’re too young to take self-responsibility and make informed long-term decisions?

“This girl was groomed, raped, and her friends murdered – make it make sense.”

Other users said they “felt sorry” for the 21-year-old.