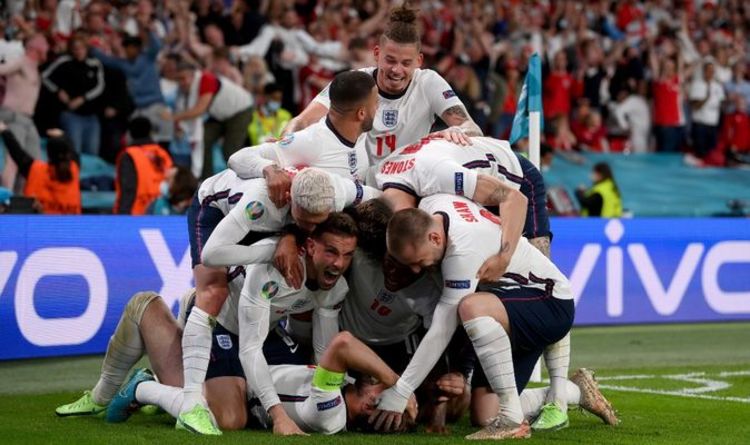 Johannes Mittermeier, FOCUS online editor, insisted the “VAR experiment has failed” after Raheem Sterling won a penalty that resulted in Harry Kane converting the winning goal in extra time to make it 2-1 at Wembley. Writing for the German website, Mr Mittermeier said: “A penalty kick, which many thought was ridiculous or even scandalous, helped England win against Denmark and get into the European Championship final.

“The fact that the video referee did not intervene because he did not want to, was not able to or was not allowed to, allows only one conclusion given the dimension of this decision: The VAR experiment has failed.”

The German commentator admitted England “deserves” its place in the final, saying the Three Lions were the “more dominant, better and dangerous team” in the semi-final.

But he condemned the semi-final being “decided in such an absurd way, by a highly controversial, highly complimentary, for many ridiculous or even scandalous foul penalty kick”.

Mr Mittermeier went as far as to say the VAR “failed at the most critical scene of the tournament”.

“Sterling was simply not fouled. It was more like a dive. Period.

“Technical means must lead to a clarification of the situation – as an aid for the referee, not as an overly didactic corrective.”

Mr Mittermeier concluded by calling for VAR to be scrapped.

Last night saw Gareth Southgate’s team secure victory sending them to their first major tournament final in more than half a century.

Prince William, Boris Johnson and David Beckham were among 60,000 supporters inside Wembley.

Denmark took an unlikely lead only to concede an own goal equaliser 10 minutes later.

Skipper Kane bundled home the rebound after his extra-time penalty had been saved.

England’s victory means the men’s team will play in their first major final since the 1966 World Cup, which they won.