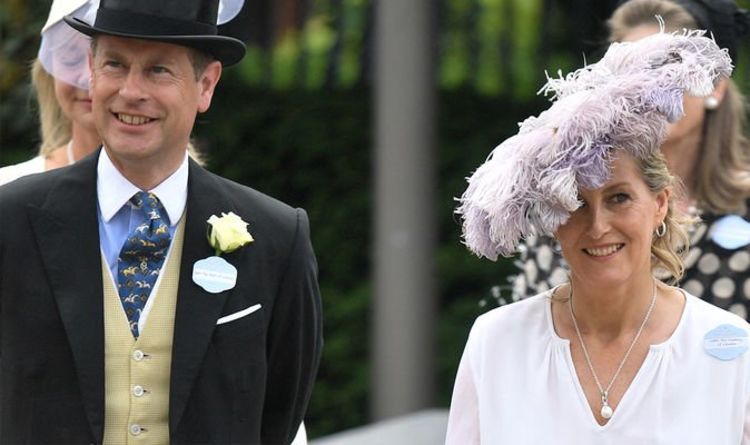 Sophie, Countess of Wessex, 56, and her husband Prince Edward, 57, seemed to stand in for the Queen on Wednesday as they attended the second day of Royal Ascot 2021, in her absence from the event. The Wessexes have been promoted up the Firm since Meghan Markle and Prince Harry’s departure and have proven themselves to be popular with the public and a safe pair of hands when it comes to royal duty.

While Edward wore a traditional morning suit and tales, Sophie stunned in a white blouse and mauve floral skirt topped off with a striking feather hat.

Body language expert Judi James analysed a series of photos of Sophie and Edward on the second day of Royal Ascot 2021 and shared her insights.

The analyst told Express.co.uk: “As they come up to their twenty-second wedding anniversary on Saturday it’s fascinating to see how their quieter, low profile signals of affection to each other and loyalty to the Queen have brought this couple from right down at the back of the royal field to popular front-runners, following the traumas the Firm have been through in the past year or so.

“Success and overwhelming popularity might have come late for Edward and Sophie but it has been their calm, natural-looking and unfussy body language that has made them such a formidable double-act during the pandemic.”

Judi added: “Edward tends to look delighted to watch his wife take more of a leadership role in the family while her eye-gazing signals tend to flatter him when he speaks.

“Here they are perfectly mirrored with their heads slightly inclined towards one another in a gesture that suggests trust and strong rapport.”

Sophie and Edward live at Bagshot Park in Surrey with their two children Lady Louise Windsor, 17, and James, Viscount Severn, 13.

They were among a host of royals to attend the races for the opening day of Royal Ascot on Tuesday.

While the Queen is yet to attend the five-day event she has horses running every day.

On Tuesday, her racing manager John Warren hinted she would attend the racecourse later in the week.

The Queen is one of Britain’s biggest racehorse owners and breeders and takes a keen interest in all aspects of the sport.

In a series of interviews being shown throughout ITV Racing’s coverage of Royal Ascot 2021, Camilla, Duchess of Cornwall described racing as the Queen’s “passion in life”.

The REAL reason for the HGV driver shortage – and why...

The REAL reason for the HGV driver shortage – and why...