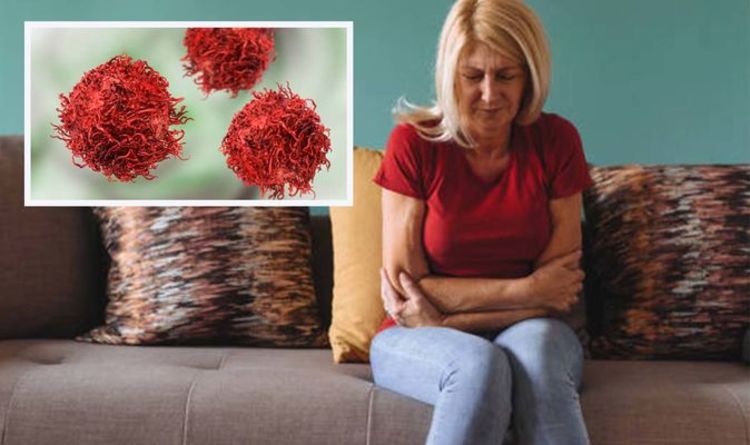 Stomach cancer is an abnormal growth of cells that begins in the stomach. The stomach is part of the digestive system. It’s in the upper left side of the tummy (abdomen). The risk of developing stomach cancer increases as we get older, and over half of people who develop it are 75 or older. It is also more common in men than in women.

According to Dr El-Hayek, writing for the Cleveland Clinic potential “warning signs” of stomach cancer may show up when you go to the toilet.

The Dr states: “Your bowel habits have changed. Maybe you’re experiencing recurrent bouts of diarrhoea or constipation that are out of the ordinary.”

“You have blood in your stool or vomit. This is much less common, but it can happen if you’re losing a lot of blood,” adds Dr El-Hayek.

The NHS notes: “There are many possible symptoms of stomach cancer, but they might be hard to spot.”

READ MORE: Omicron symptoms: Seven early symptoms to spot and why they differ from the Delta variant

This is partially because some signs can also be symptoms of other conditions.

The Mayo Clinic says that signs and symptoms of stomach cancer may include difficulty swallowing, feeling bloated after eating, and feeling full after eating small amounts of food.

It adds: “If you have signs and symptoms that worry you, make an appointment with your doctor.

“Your doctor will likely investigate more-common causes of these signs and symptoms first.”

Macmillan states: “The main test used to diagnose stomach cancer is an endoscopy. This is a test that looks at the lining of your oesophagus, stomach and duodenum (the first part of your small bowel).”

Cancer Research UK says: “Your risk of developing stomach cancer depends on many things including your age and lifestyle.”

It notes that anything that can increase your risk of cancer is called a risk factor. Those that lower the risk are called protective factors.

It explains: “Having one or more risk factors doesn’t mean that you will definitely get stomach cancer.”

The charity states that more than five out of 100 stomach cancers in the UK are caused by being overweight or obese.

It adds: “Stomach cancer risk is higher in people who drink 3 or more units of alcohol each day, compared with people who don’t drink or only drink occasionally.”

Nonetheless, the NHS states: “It is important to get any symptoms of stomach cancer checked by a GP.

“Even if you do not think you fit into any of the groups with a higher chance of getting it. Anyone can get stomach cancer.”

Around 6,700 people are diagnosed with stomach cancer in the UK each year, according to Cancer Research.

Nonetheless, the number of people in the UK diagnosed with stomach cancer has fallen since the early 1990s.