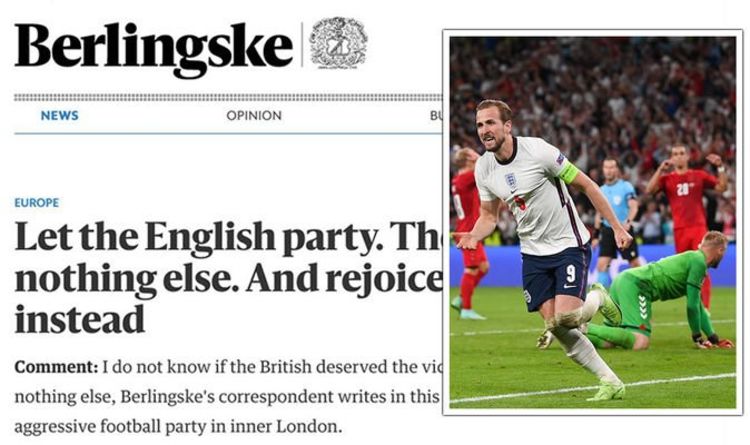 After a historic win yesterday, Gareth Southgate’s team will now play Italy in the Euro 2020 finals on Sunday. But following their victory, Danish media hit out at refereeing decisions and claimed “cowardly tricks” made them lose the game.

One of country’s biggest newspapers, Berlingske, had the headline, “There was no penalty”, referring to the extra-time spot-kick that was won by Raheem Sterling.

This allowed Harry Kane to secure that second goal, pushing England to the win.

Journalist Poul Hoi went on to attack Britain’s “poor” leadership when it came to the coronavirus pandemic.

He said the UK’s death toll was evidence that readers are “lucky” to live in Denmark.

“They have nothing else.

“And rejoice in one thing instead.”

Describing some of the celebration scenes in London following the win, the journalist wrote: “It is no coincidence that the third wave began in the British Isles and that it is so much more dramatic than elsewhere.

Another Danish tabloid attacked the “disgusting and cowardly trick” by an England supporter who shone a laser at Kasper Schmeichel during the penalty.

While some Danish newspapers hit back at England’s win, others praised the national side and looked to the future.

The headline in newspaper B.T. read: “Thank you, boys.”

While the Politiken said: “Thank you for a fairy-tale Danish Euros.”

It then described a “beautiful Danish defeat” in its centre pages.

Former Danish national football coach, Age Hareide, praised the team and said it has its brightest days ahead.

He wrote: “It has been an incredibly beautiful journey for Denmark and for the boys.

“You should be proud of their performance throughout.

“Denmark has many young players who can become really good in the years to come.

“Maybe you do not feel that way right now, but I can assure you that the sun is shining.

“The sky is really blue for Danish football.”