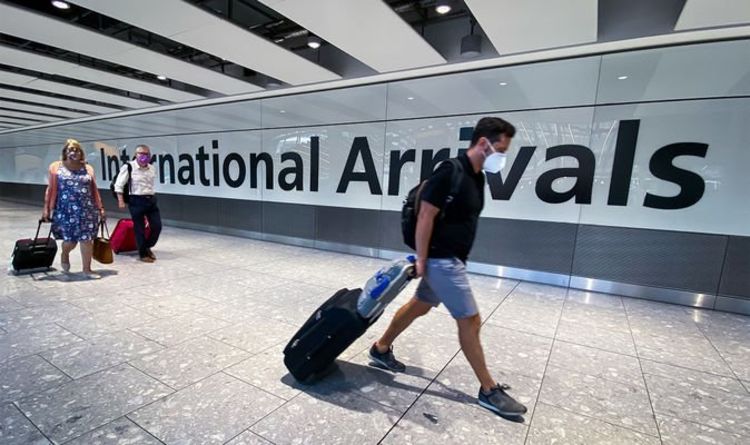 From May 17, Boris Johnson will allow Brits to travel internationally to ‘green list’ countries with low coronavirus cases not requiring a quarantine period upon return. But scientists have sounded the alarm over the risks of new variants spreading without quarantining returning holidaymakers.

Members of the Scientific Advisory Group for Emergencies (SAGE) are said to be concerned the Government’s ‘traffic light’ system poses a danger to the UK’s Covid recovery.

Reports suggest SAGE members think the system amounts to “window dressing”, and believe it is not based on evidence showing the risks from new Covid variants.

Under the May 17 travel plans, travellers from England allowed to return from ‘green list’ destinations without needing to quarantine.

Countries included on the ‘green list’ are Portugal, Israel, South Georgia, the Faroe Islands and the Falklands.

Speaking to the Observer, Martin McKee, professor of European public health, said more testing was necessary before international travel should be allowed to reopen.

He told the outlet: “If everyone from England going to Portugal was only mixing with people from Portugal, that would be one thing.

“But if you go to a Portuguese resort, it is likely you would be mixing with people from other places.

“The criterion you should be looking at is not the infection rate and vaccination rate in the host country, but among the people who you’re likely to be mixing with.

Speaking at a Downing Street briefing, Mr Shapps said the changes were a “tentative” first step to opening.

The secretary said the UK’s approach to travel was “necessarily cautious”, and added the “success in combating Covid” in the UK was “not yet replicated in many places abroad”.

He then said: “We must make sure the countries we reconnect with are safe.”

Travel industry experts have been critical of the Government’s ‘traffic light’ system.

Airlines UK called the move a missed opportunity and “a reopening of air travel in name only” which leaves the UK “at risk of falling behind”.

Easyjet chief executive Johan Lundgren also added: “The decision to put so few European countries into the green tier is simply not justified by the data or the science and is inconsistent with the approach to reopen the domestic economy.”

It comes as the UK has fully vaccinated 26.5 percent of the population, while 53 percent have received their first dose.

Yesterday also saw another 1,770 cases and 2 deaths within 28 days of a positive coronavirus test.