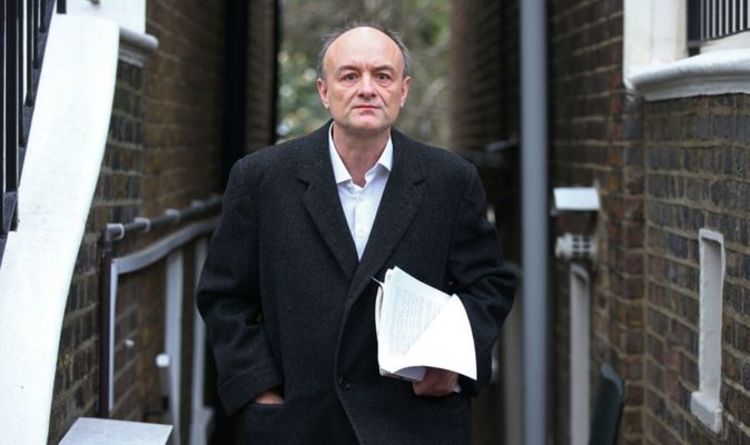 Dominic Cummings shot to fame during the Brexit referendum as a key strategist in the Leave campaign.

More recently Mr Cummings has been making headlines as a critic of the government’s early handling of the pandemic.

Mr Cummings was forced out of No. 10 Downing Street in November 2020, where he had been serving as chief adviser to the PM during the pandemic.

Since leaving office, Mr Cummings has blasted the Prime Minister over his handling of the pandemic – but, his greatest stings have been targeted towards Mr Hancock.

He posted his recallations of this meeting on his blog, it reads as follows:

“When I had a separate meeting with officials on PPE supplies, I heard the following terrible news, flatly contradicting Hancock: we won’t get most of our PPE deliveries until long after the April peak.

“Official: That’s how long it takes to ship.

“Me [extreme sinking feeling]: What do you mean ‘ship’, surely we’re flying everything now?

“Official: No, that’s against the [procurement] rules, we ship everything because it’s much cheaper.

“Me (close to the most angry/appalled I was in 18 months): After this meeting, call the airlines, tell them we’re hiring their planes, their entire business is dead so you’ll be able to get a great deal, get officials figuring out where the nearest airfields are in China to the factories with our stuff, then fly the planes to those airfields, collect our stuff, fly it back, and tell everybody we’re flying stuff in an emergency not shipping it…

“Official: Umm, will you get the Private Office to put that in writing. [A standard comment in such meetings.]

“Me: Yes the PM will take full legal responsibility.”

Mr Cummings later claims one of the things that held up PPE supplies, was because Matt Hancock and his team were trying to demand a 25 percent discount on these products at a time when there was a global shortage of these supplies.

Mr Cummings wrote on his blog, the Foreign Secretary, Dominic Raab, who was deputising in the PM’s absence whilst he was recovering from Covid in April 2020, questioned why Matt Hancock was asked why he turned down PPE supplies.

Mr Cummings said at the meeting: “I said there was no excuse for officials turning down PPE on the basis of price markups — the PM and I had said clearly weeks earlier that those rules were binned.”

Mr Cummings writes that Mr Hancock was condemned by multiple people in that interview for failing to procure PPE as he refused to purchase supplies that were deemed too expensive.

If the claims made on Mr Cummings’ blog are true this is highly concerning, however, these conversations are not accompanied by further evidence such as texts which he uses to back up other claims.

Whilst these conversations make for concerning reading, without further evidence to back up these claims it remains a ‘he said, she said’ situation.

Gmail and Outlook warning: Delete these emails now or pay a...

Sky Q vs Virgin Media vs BT TV: Which of these...

Hypertension diet: The 2p snack that can lower blood pressure and...

Gmail and Outlook warning: Delete these emails now or pay a...

Sky Q vs Virgin Media vs BT TV: Which of these...

Hypertension diet: The 2p snack that can lower blood pressure and...