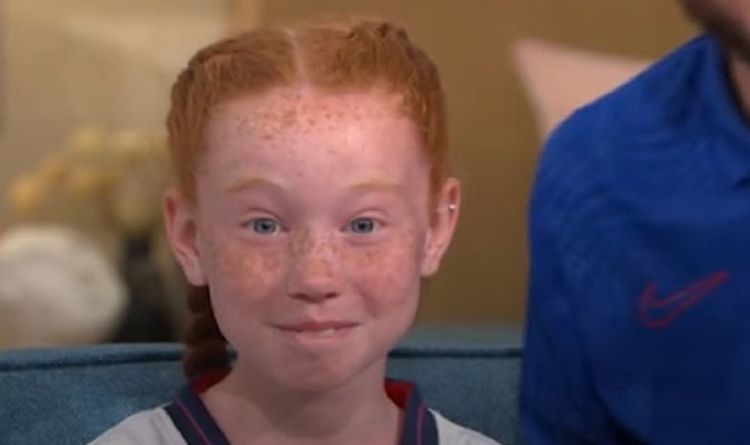 Schoolgirl Belle McNally was picked out by England midfielder Mason Mount following Wednesday’s nail-biting Euro 2020 victory over Denmark and received the player’s shirt. Footage of Belle breaking into tears on receiving the prized jersey quickly went viral. Now the youngster has revealed the England top has been “hidden it in a drawer” and will not be washed “because it smells like Mason.”

LBC host Tom Swarbrick asked the youngster: “How was that then, when you got given the shirt, how did it feel?”

“It was amazing,” replied Belle.

“I had so many mixed emotions, I was so shocked, I didn’t know what to do, so I just went up to my dad, hugged this shirt, and it was just all crazy.”

Mr Swarbrick then asked: “I read that you’ve actually seen Mason Mount before?”

The schoolgirl explained that Mount may have spotted her from the England bus when she waved as the coach went past prior to the game.

“Tell me what you’ve done with the shirt in the last day or two,” asked the LBC host.

I’ve actually hidden it in a drawer because I don’t want anybody to touch it,” replied Belle.

“Because it smells like Mason, and I’m worried that if someone touches it the scent is going to go.”

“We are trying to get her over there to give the good luck to the England team but if we can’t make it to the game itself we’ll be cheering Mason and the boys on with all our passion, more than ever.”

A now-viral video shows the moment Mount handed over his shirt to Belle before the emotions of the moment overwhelmed the little girl and she burst into tears of joy.

England saw of Denmark in a thrilling 2-1 win and now face Italy in their first major men’s tournament final in 55 years on Sunday.